Any construction project requires a blueprint. That’s how your vision meets reality.

Unfortunately, the blueprint doesn’t guarantee that the build will be as perfect as it is on paper. But without it, you may find yourself with a house Alice would find in wonderland.

So how does the idea of a blueprint relate to beekeeping? Well, foundation vs. foundationless beekeeping refers to the two frame options, or “blueprints” instead, that beekeepers use for their honey bees to build comb.

So, if you’re a beginner who is just starting, then it’s likely that you’re still trying to decide which blueprint or approach to go with.

Our goal is to help you better understand the great foundation vs. foundationless divide so you can get started!

You can expect to discover the four main differences between the different beekeeping approaches and their pros and cons so you can ultimately determine which method is best for you.

Our goal is to help you gain a better understanding of the foundation vs. foundationless divide so you can ultimately get started!

Foundation vs. Foundationless Overview: What the Heck is the Difference?

Many new beekeepers are eager to understand what main differences exist between foundation and foundationless beekeeping so they can choose one.

Well, in short, the primary difference between foundation and foundationless beekeeping lies in the type of frames beekeepers use. Let’s dive deeper and first explore the two methods on a broad level.

Foundation Beekeeping at a Glance

One sheet of foundation (see details) covers the space within a frame from one end to the other. On it is an imprint of cells that the bees will build on, known as drawing out. 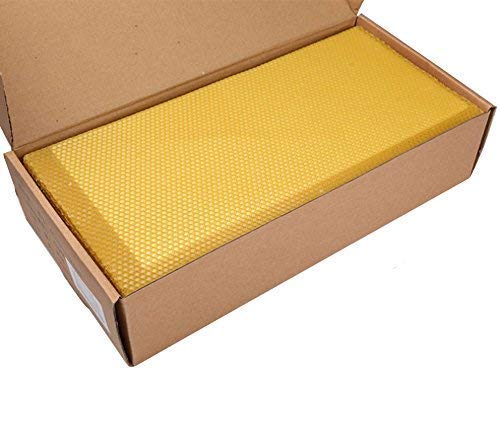 This not only tells them where to build but how to build. It’s almost like they have a little OCD because they will not draw out different-sized cells from those imprinted on the sheet.

This helps the beekeeper, particularly commercial ones, because it encourages the bees to build worker cells that the queen lays fertile eggs in. The more workers the colony has, the greater the workforce.

Foundationless Beekeeping at a Glance

It is essential to note that foundation isn’t the only form of blueprint you can use, hence the discussion on foundation-less vs. foundation beekeeping. Let’s dive deeper and understand the basics of foundationless beekeeping.

But first, do you remember how foundation frames acted as a guide for honeybees to draw their comb? Well, regarding a foundationless approach, this is no longer the case. Bees can build comb naturally and on their terms under this method.

You see, without a few helpful hints, which is essentially what the foundation frames offer to your six-legged workers, they will build comb to their liking. It could make harvesting honey very destructive.

When bees are given free rein to construct whatever size cells they want, they’ll probably construct more drone cells, which are larger than worker brood, than if they were building on the foundation. Not great for honey production, but essential for the survival of the species.

Below is an image of a beekeeper who is using foundationless frames. The honey bees drew that comb themselves and without interference. That’s some good-looking honeycomb, wouldn’t you say?!

Let’s explore some other differences between the foundation and foundation-less approaches.

Foundation vs. Foundationless: The Materials Used

Foundation frames like these can be made of plastic, wax, or wax-covered plastic.

Plain plastic isn’t very popular with bees, and it usually needs to be sprayed with an incentive such as sugar syrup to get them to draw out a comb from it.

Beekeepers have noticed that bees would rather build a new comb from scratch than build a comb on plain plastic.

Even so, the plastic foundation is still effective, and it’s quite hardy. It can withstand the centrifugal force of the extractor and will stay in place during warm days, which would otherwise cause the wax foundation to melt and break off from the frame.

The wax foundation is more attractive to the bees, but its greatest flaw is the pesticides it contains.

The commercially purchased foundation is made from wax sourced from commercial beekeepers that use pesticides to control varroa mite infestations.

A lot of these pesticides are absorbed by the wax. And they are not released when the wax is rendered from the comb.

Even worse, wax from different areas can be melted down together, combining these chemicals and creating toxic compounds that remain in the wax. As you can imagine, this does not provide a healthy environment for your bees.

Alternatively, the foundation-less approach uses frames like these to beekeeping utilizes little or no wax.

To point your bees to the exact construction sites, all you need is to create a protruding fixture on the bottom side of the top bar of the frame. This can be made using wood strips.

Even Popsicle sticks would work. You could even cut foundation frames into strips and insert them into the groove on the underside of the top bar.

Finally, and easiest of all, if you already have a frame of drawn-out comb, just sandwich one empty frame between the two drawn-out combs, and the bees will do the rest.

The materials used to go foundation-less are much cheaper and easy to use.

The idea behind the foundation is to give the bees a head start in construction.

Unfortunately, sometimes the bees don’t see it that way. As mentioned above, bees prefer to construct their internal fixtures and fittings from scratch.

In fact, according to G.M Doolittle, rather than building directly on plastic, they take the time to cover the entire sheet in beeswax first and then draw out the comb.

Therefore, there aren’t any significant time savings between the two approaches.

Foundation vs. Foundationless: Difference in Efficiency

Construction of comb can go wrong with both approaches, but the risk of mishaps is higher when using foundationless frames.

Should you choose to go foundationless without the guides or install the guides incorrectly, you are likely to wind up with a honeycomb that joins several frames together.

In fact, when beekeepers choose a foundation-less approach, they must understand that the newer the comb is, the more brittle it is. In turn, going foundation-less calls for a change in handling the frames in your hives. And you may have a few mishaps during the transition.

For reference, the picture below shows just how brittle and what could happen to comb when beekeepers use a foundationless approach to beekeeping.

In contrast, a honeycomb drawn on a foundation can take a lot more abuse than fresh new wax straight from the bee.

Foundation is sturdier and can withstand shaking, and won’t break even when placed horizontally during inspection or harvesting.

The bottom line here is that you will have more drones with foundation-less frames.

With foundation frames, the drone population will be fewer than 10% of the colony. Drones don’t bring home the honey, so beekeepers like to keep drone numbers low.

However, in nature, the drones in a colony would be about a fifth of the population, which is double that of the foundation-led beehive.

They still have a limit on the population of drones, so they wouldn’t allow those numbers to explode unless something was wrong with the queen.

They also factor in resources when drawing out drone comb and won’t do so if they don’t believe the colony has enough food to sustain them.

Clearly, having more drones won’t significantly affect the hive’s productivity as long as the bees are healthy.

Are having more drones so bad? Not really. In fact, more drones mean a higher survival rate for the honey bee species.

We know that they need all the help they can get, and a good population of healthy drones provides the gene pool with diverse traits needed to adapt and survive in the new world.

Wrapping Up Foundation vs. Foundationless Beekeeping

When it comes to the two methods of beekeeping, you don’t have to be one or the other.

Many beekeepers use both approaches. Keepers with top bar hives and bee hive box like this have proven that foundation isn’t essential to beekeeping.

With the increased use of pesticides, many beekeepers are shifting to foundation-less beekeeping.

If you started with foundation, how about you try a few foundationless frames and see if it works for you.